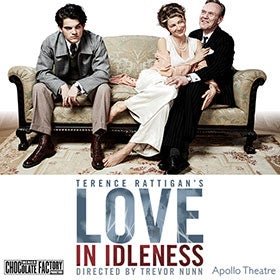 Terrence Rattigan fought with this play. First titled Less Than Kind, he wrote and rewrote the characters throughout the later months of 1944, while war raged across Europe, and finally changed its name to Love In Idleness. This new production, another feast of theatrical excellence by Trevor Nunn, blends the two into a hybrid so good, so cringe-makingly funny that it's transferring from its original home at the Menier Chocolate Factory to the West End's glittering Apollo Theatre. Directed with verve, acted with consummate skill, it's a highly desirable theatrical experience and tickets are tipped to go like hot cakes.